The theater of Roman Plovdiv could accommodate up to 5,000 people

ROME IN PLOVDIV, THE STORY OF A CITY

Pulpudeva, Philippopolis, Trimontium, Puldin, Filibe and Plovdiv: this city in the Southeastern part of the Balkans has changed many names and rulers through the millennia. What has remained unchanged through time, however, is its appeal. The first Neolithic settlers in Europe were quick to appreciate its advantages. Later generations would also come to value the natural defense of the three hills by the copious River Maritsa, the proximity to the Rhodope Mountain with its resources, the location along the strategic route connecting Asia and the Bosphorus with Central Europe along which the Romans later built their notorious road called Via Diagonalis, or the Diagonal Road, and also Via Militaris, or the Military Road.

For six centuries in its millennia-spanning history, Plovdiv was part of the Roman Empire. Rome imposed its rule over this ancient Thracian city in 46 AD. During the following centuries, prosperity alternated with decline, political and economic crises, and incursions.

Ancient Philippopolis was a city of many gods. Deities of all shapes and sizes, local as well as imported, worshiped by all or by the initiated few, were brought into the city in the hearts and minds of people from all corners of the empire. The God Rider of the local Thracians cohabited with newcomers such as Apollo and Hermes, Zeus and Asclepius, and foreigners, enshrouded in mystery, such as Mithras and the Phrygian Cybele. The citizens of Philippopolis also adhered to the official cult of the emperor. A significant number of Jews lived in the city, too. In the 2nd century, they erected a large synagogue with a mosaic floor depicting a magnificent menorah.

In the 4th century, however, life and the religious landscape of the city changed dramatically. In 313 the Edict of Milan legalized Christianity as an official religion. In 324, Emperor Constantine moved the capital from Rome to Constantinople. Philippopolis woke up in close proximity to the heart of the empire.

It is unclear when a Christian community emerged in Philippopolis, but there are indications that it happened as early as the 1st century with bishop Holy Apostle Hermas. It is certain, however, that at the end of the 3rd century, the Christian community of Philippopolis was already sizable. During the anti-Christian persecutions by Emperor Diocletian, 37 Christians of Philippopolis were killed because of their faith, probably in 304. They are still being honored by the Bulgarian Orthodox Church.

Philippopolis became the seat of a diocese and later of a metropolitan archdiocese. The religious strife and disputes characteristic of the period came to the city as well. Arianism, according to which the Son was subservient to the Father, became popular. When in 342-343 the clerical council in Serdica, now Sofia, Bulgaria, declared Arianism a heresy, the Arians held their own counter-council in Philippopolis.

A few years after the Edict of Milan, Philippopolis started constructing sumptuous churches for the increasing number of believers. The Bishop’s Basilica was the most attractive of them all.

However, the incursions by the peoples involved in the great movements of the 5th-7th centuries continued. The Romans had erected their Philippopolis in the plains. Though it was protected by a fortification wall, the ancient city no longer could defend itself. Its citizens had to abandon their homes and their churches, and seek security on the three hills. The Middle Ages settled in - and they brought a new chapter to the city’s history. 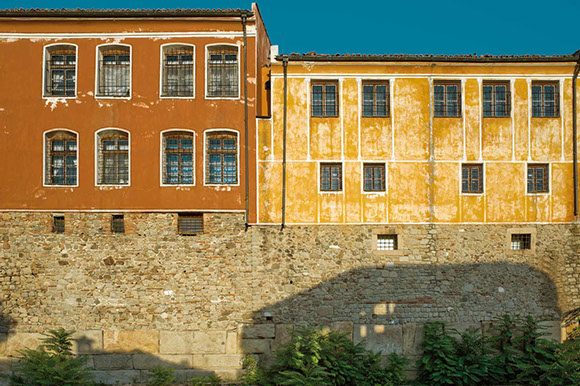 The past can never completely die or disappear in a city with a millennial history such as Plovdiv. The remnants of Philippopolis, the grandest city of Roman Thrace, continue to exist and evoke Antiquity side by side with newer buildings.

In the Old City, the mighty remains of ancient fortification walls were used as the foundation for medieval construction over which, in the 18th-19th centuries, residential houses were built. The modern citizens of Plovdiv and its visitors attend concerts in a theater dating back to the 2nd century, accommodating up to 5,000 spectators and commanding stunning views of the Thracian Plain and the Rhodope. The stadium, where up to 30,000 citizens of Roman Philippopolis could attend sports games, dates back to the end of the 1st century. It is now one of this city’s main attractions.

The large, modernist Post Office building in the central square appears dwarfed by the huge remains of the Roman Forum over which it was built. The passers-by through the Archaeological Underpass walk over the slabs of a Roman street flattened by the steps of generations of citizens many centuries ago. The Eirene Building still houses a magnificent mosaic dedicated to the deified protector of peace. A restored stretch of the 30-kilometer-long aqueduct that supplied Philippopolis with fresh water from the Rhodope hovers over the traffic of a modern thoroughfare. The Small Basilica, with its mosaics, is a major example of how to incorporate archaeological heritage in a modern city.

The remains of Roman Philippopolis take central place in the Plovdiv Regional Archaeological Museum. They include a captivating gallery of statues of people whose names we will never know, reliefs of deities, votive tablets dedicated to long-forgotten gods, and mosaics belonging to houses whose owners have long turned to dust.