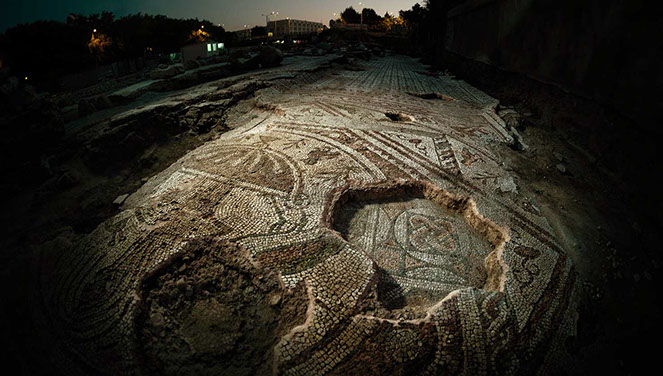 The upper and the lower layer of mosaics in the northern nave of the Bishop's Basilica The Bishop's Basilica mosaics are a lot more than just pretty images. Each bird, rosetta, and meander conceal artistic skills, hours of work and years of experience.

The mosaics were executed in the opus tessellatum technique, which involved forming images with small stone cubes of different colors against a mortar grounding. It was a slow effort: a craftsman could complete no more than half a square meter in a day. The mosaics at the Bishop's Basilica were produced using white, black, yellow, ochre, red, several shades of blue and green stone cubes. Some of them, including the green ones, were semi-precious stones from the Rhodope.

The mosaics at the Bishop's Basilica as well as those from other locations in Philippopolis during the 4th-6th century, were in the style prevalent in the Eastern Roman Empire. However, they do have a few singular characteristics.

The 4th century mosaics of the first layer in the basilica are geometrical. Those in the central nave, which are the oldest, are monochrome. They depict large geometrical wave patterns and rosetta designs. The mosaics in the northern and southern naves are newer, a genuine explosion of colors and forms. Their intricate ornaments create a three-dimensional optical illusion where rosettas intertwine with garlands and opulent crosses stand next to circles full of varied colors.

The 5th century mosaics of the second layer combined geometrical designs with the Bishop's Basilica hallmark, birds. The middle panel of the central nave contains over 100 birds of various kinds and species. The middle panels of the two side naves contain the Spring of Life scene. 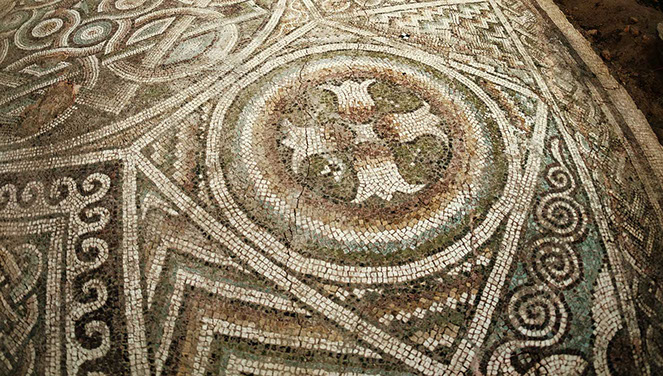 The mosaics of the first layer in the southern nave are multicolored and with intricate geometrical ornaments, creating a three-dimensional illusion

With their alternations and bright colors, the mosaic peacocks and rosettas, crosses and meanders, parrots and guinea fowls in the Bishop's Basilica are a feast for the eyes. However, they are much more than that. They radiate meaning.

The geometrical designs in the first layer of mosaics testify to the artistic challenges faced by a society in transition from paganism to Christianity. The new religion still sought its own artistic language - and borrowed from the pagan heritage. This is why meanders, rosettas and еndless knots appeared on the mosaic floors of the Bishop’s Basilica. Significantly, among them was already featured the main symbol of Christianity, the cross.

The first layer of mosaics is a significant source of information for the history of the basilica. A donation inscription in the southern nave identifies the temple as the seat of a bishop. It has partially preserved the name of the clergyman who probably commissioned and paid for the production of the mosaic floor: someone whose name ended in "-cian."

The second layer indicates that Christianity had already found its own symbolic language. The dozens of birds on the floor epitomize the Garden of Eden. The peacocks represent even stronger symbolism: they suggest the immortality of the soul. This is perhaps why a peacock with an opulent, multicolored train was placed at the main entrance to the basilica. The Spring of Life scenes are also imbued with connotations. The fountain symbolizes Jesus and the idea that whoever drinks from it will attain eternal life.

The Christian symbols alternate with the geometrical designs of the previous epoch, an important testimony to the continuity the Bishop's Basilica has pre-served. 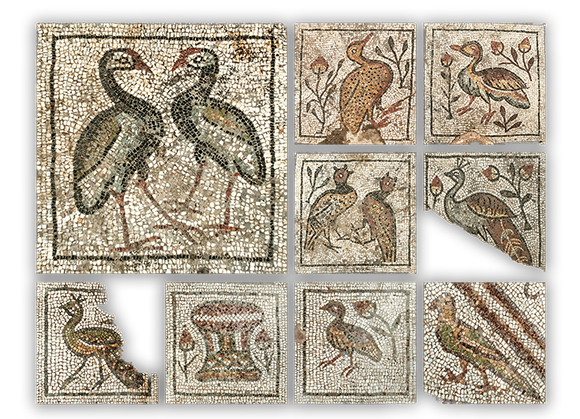 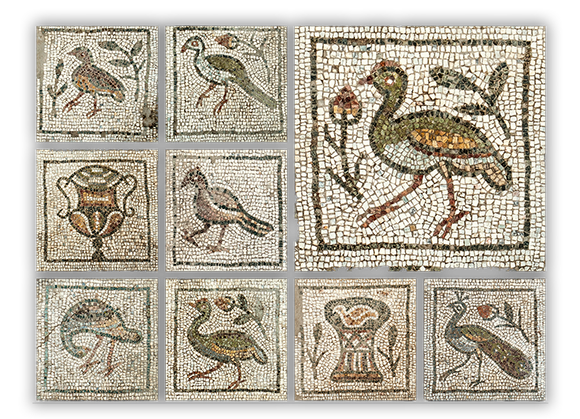 Birds in the second layer of mosaics in the Bishop’s Basilica. The mosaics in both layers are astonishingly well preserved in situ and are thoroughly authentic

The Small Basilica was inaugurated in 2013 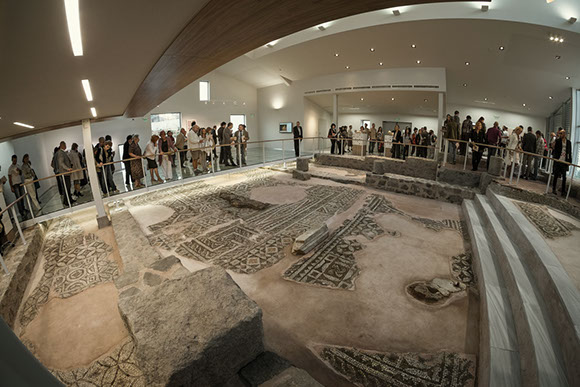 The inauguration of the Small Basilica in 2013

Prior to taking up the challenge to bring the Bishop’s Basilica back to life, America for Bulgaria Foundation and Plovdiv Municipality successfully completed a similar project involving a Late Antiquity church with intriguing mosaics, holding valuable information about Roman Philippopolis.

In 2010, the partnering organizations started archaeological research of the Small Basilica, a 5th-6th century church located near Philippopolis’ eastern fortification wall. Discovered in 1988, the Small Basilica contained excellent mosaics and one of the best-preserved baptisteries in this country belonging to that period. A partially preserved donation inscription indicated the church was built by grateful citizens to honor a military commander who had saved the city from an incursion.

Lack of funding and care, however, had condemned this witness to history to decay and oblivion.

The initiative of America for Bulgaria Foundation, Plovdiv Municipality, and the Culture Ministry provided the opportunity for a comprehensive conservation and restoration of the mosaics and other remains of the Small Basilica and its environment, including parts of a fortification wall, a street and a water well. The research at the basilica unearthed mosaics charged with symbolism: a pair of doves, epitomizing the Holy Spirit, and a stag signifying the human soul searching for god.

In 2013, the Small Basilica and its nearby area belonging to the Late Antiquity city was inaugurated. Today the basilica is full of life and is visited not only by those interested in ancient history. Exhibitions, concerts and even weddings are held there, an excellent example of an archaeological site integrated in the environment of a modern city. 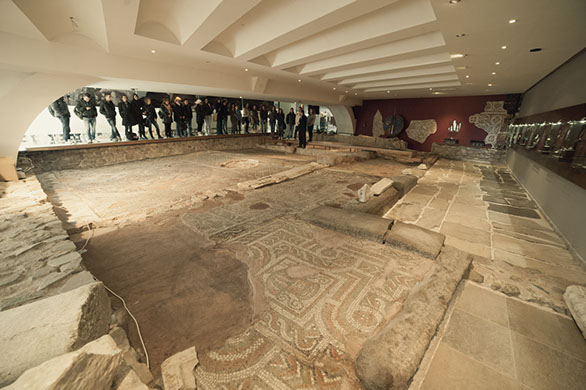 The passers-by through the Archaeological Underpass in central Plovdiv step on a well-preserved Roman road. They also go by the home of a wealthy Roman and can enter it to see some of the most remarkable Roman mosaics preserved in the eastern Balkans.

Eirene, the goddess of peace, is elegant. Her face was composed of fine tiles and smalt in white, black, red, ochre, yellow, green and cyan, and looks as fresh as it did to the owners of this sumptuous home 1,600 years ago. The sensation of vivacity in her beautiful face was achieved by using the opus vermiculatum technique. It involves the utilization of small stone tiles that are smaller than those used in the classic opus tesselatum method and whose irregular shape helps to achieve better similarity to real-life images.

The mosaics in this sumptuous townhouse preserved not only the name of the goddess but also the name of its owner, Desiderius.

The opulent mosaics in the Eirene Building take up 160 square meters and decorate the four representative rooms in the building’s eastern area. The house also has a peristyle (an open, colonnaded courtyard), one the favorite pastime locations for every well-to-do Roman. The Eirene Building took up a whole insula (the block between four grid streets) in the town thus asserting both architecturally and visually the social status of its owners.

The Eirene Building probably dates back to the 3rd century. Its sumptuous mosaics were produced in the second half of the 4th and the early 5th centuries. The residential building was abandoned in the 6th century. Its remains were discovered in the 1980s when the modern underpass was under construction. In 1995, the building was declared a national heritage site. Today the Eirene Building is a culture center.